About Me, Peter Bach, Jr.

Johann Sebastian Bach, like most of us know him. ✓✓

First of all: Welcome to my website and my project "Bach on Bach". You are wondering – if you found me on Google – if it is this family of musicians – by the way the biggest on earth – and if I belong to it. Yes, I do, even if I am "only" a far, far away cousin of Johann Sebastian Bach, thus "almost not related", if you compare me with various other members living in the USA today. Or compared to just a "handful" of members, great-great-great-grandchildren* of the master, who live in Germany, and even fewer who live in the "Land of the Bache", which is Thuringia. But, these few no longer carry the name Bach.  ✓✓

That's how I used to look, but hardly anyone remembers that anymore. Wearing Bavarian Lederhosen (... Leather Trousers). Waiting for the fun of life. Both in Germany and in the United States of America. You see, my wife and I love the USA. Even in our earliest years, we were enthusiastic about the "American Way of Life" and watched – not yet together – "Little House on the Prairie", "The Waltons", and – this must not be forgotten under any circumstances – "Flipper" on what was then still black-and-white television. ✓✓

If you are interested in more music gifts in general click in the line below. For music T-shirts choose "Spreadshirt" or "Zazzle", for music calendars with a  huge grid choose "Zazzle" … learn more.

Just as I share Johann Sebastian Bach with you today, I also shared my ice cream half a century ago. By the way, this nice, young lady did not later become my wife. So, the girl in the picture is not Renate.   ✓✓

The Artist at Work 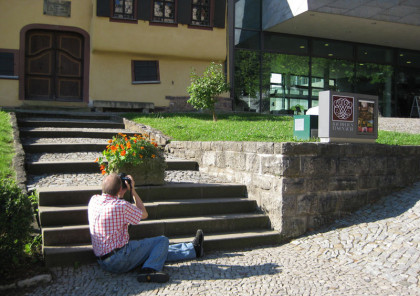 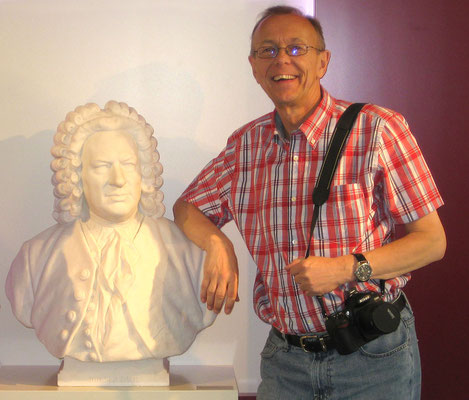 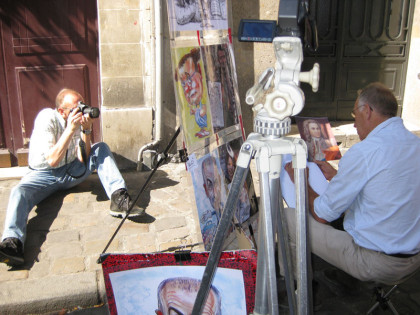 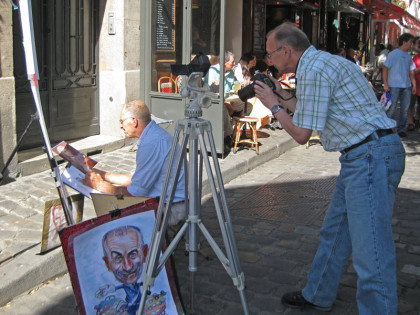 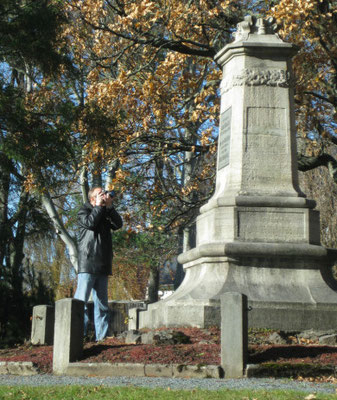 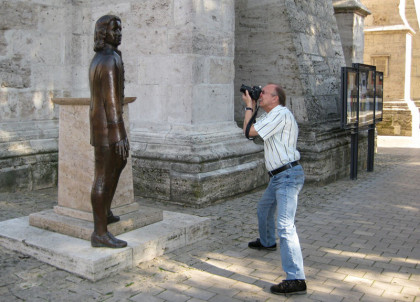 That's what I do for a living: I'm a photographer, writer, and I manage marketing and public relations for newspaper publishers and breweries and a cool forwarding company in Germany, which is Rüdinger-Spedition in Krautheim, Hohenlohe. Making videos and writing storyboards (... scripts) is part of it and of course everything is state of the art. When it comes to newspaper publishers, my wife and I are market leaders in our niche throughout Germany, and have been for over 35 years.   ✓✓

But I also offer services in the website industry. About 10 years ago, my father, Peter Bach, Sr., was a third member of this small company, but now he has passed away – having lived through the beginnings of the Johann Sebastian Bach Mission – at the age of 93. That was in 2017. ✓✓

The pictures above have nothing to do with my actual job, as they were all taken while I was photographing cities and places related to my Bach project. The first picture is in front of the Bach House and the Bach Museum in Eisenach, Thuringia, Germany. The second is "J.S." and me in Leipzig. The third and fourth pictures were taken in Paris, behind the great Sacré Coeur church, when we "ordered" a caricature based on a historical Bach portrait with all the rights, the last one is at the brand new Bach memorial in Mühlhausen, Germany and the penultimate picture is taken in Gehren, Germany where a Bach memorial honors not only Johann Sebastian, but also his father-in-law Johann Michael Bach. By the way, this was the composer's first father-in-law. Johann Sebastian Bach married the daughter of Johann Michael Bach, so she was a born Bach, a cousin. Now, however, it seems important to me to let you know that Maria Barbara Bach was his second cousin.   ✓✓

And now guess who took all these cool photos of me? That's right, it was my wife Renate. I'm also a likeable coach when it comes to taking pictures. Especially of me. Again, I'm fooling around here.  ✓✓

I have been married for almost 4 decades and my wife and I share a profession and hobbies. We also both love the United States of America, where we now have as many friends as we do in Germany. Together we are a dream team. I am the "inventor" of new creative ideas, she is the patient person of the two of us. She is a genius at her computer. I am the "writer." I can even invent things and projects while I sleep. When I have a new idea, Renate "likes" to work on it for weeks afterwards. It's a pity that she is not able to make things come into being as quickly as I invent them. Now you've almost managed to do it. You see, I'm the clown in the musical family, a funny maker – as it used to be called – but not a comedian and not a fun maker. I'm always fooling around. Even on the internet. That's why I'm known for throughout the Bach Family of Musicians on both sides of the Atlantic.  ✓✓

Petra-Ines, My Sister ... One More Artist

My dream team as a "book author". A "hobby within a hobby" was writing my Biography of Johann Sebastian Bach for Children. When I had no experience at all, these two ladies said, "Yes, you can!".   ✓✓

On the left, that's her: my sister Petra-Ines Kaune, and she put all these cute paintings of Johann Sebastian and Veit and Balthazar into the Bach Biography for Children.  ✓✓

Now it is the complete "core" of the Johann Sebastian Bach Dream Team. In the background is the Brandenburg Gate in Berlin, Germany. Just in case you didn't notice. ✓✓

Thank You for Your Visit

Now you know the three of us ...  and you now also have more background information about me and about my past and my future (.... it's Bach) and what we do all day. Except music calendar. Bach is now a hugely time-consuming hobby and our mission to spread the knowledge about the master, his work, his music and his genealogy is a big part of our life's fun.

May I invite you to two of my websites? One is the most important to me and it's the largest in the project as well: "www.BachOnBach.com". The second is "www.Johann-Sebastian-Bach-For-Children.com".

"Music calendars and more music calendars" ... that's what this complete website is all about: Bach calendars, music calendars, and finally composers calendars. And of course ... the pipe organ calendars. Because it is the motto among all my Bach websites, it goes without saying: There is no page without at least two or three pictures of music calendars. The facts? 3 sizes. 2023 + 2024. In the shop of "Bach 4 You".   ✓✓